We are pleased to announce Trevor Rundell as the new band director at Bartlett High School. 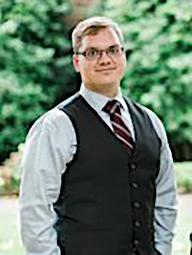 Trevor Rundell returns to Bartlett from Siegel High School in Murfreesboro, TN, where he served for a year as the Assistant Band Director. Last year, Mr. Rundell helped lead the Siegel Band to two grand championships, a Reserve Grand Championship at Middle Tennessee State University’s Contest of Champions, a Bands of America Regional Finalist Appearance, and to their first ever National Ranking at the Bands of America Grand National Championships (finishing 39th).
Siegel’s concert bands also flourished under Mr. Rundell’s direction, with both the Symphonic Band and Wind Ensemble receiving straight superior ratings at Middle Tennessee Band and Orchestra Association’s Regional Concert Performance Assessment.
Before his appointment at Siegel, Mr. Rundell was the Assistant Band director at Bartlett High School for two years. During his time at Bartlett, the band program received numerous superior ratings at Marching and Concert contests and two Tennessee Bandmasters Association Sweepstakes awards for the 2016-2017 & 2017-2018 school years.
“This continues to be an exciting time for Bartlett High School’s students, faculty, and community,” said Tim Jones, principal at Bartlett High School. “Mr. Rundell is familiar with the vision for our school, and he will be able to build on that immediately. He believes in continuing that attitude of excellence for our band program and is an outstanding fit as we continue to provide a great learning environment for our student body.”
In 2016, Mr. Rundell graduated from Tennessee Technological University in Cookeville, TN. He earned a Bachelor of Music under the mentorship of Dr. Eric Harris, Dr. Charles Decker, and Mr. Joseph Hermann. Mr. Rundell is an alumnus of Siegel High School in Murfreesboro, TN, graduating in 2012. As a student at Siegel, Mr. Rundell was part of a three-time State Championship (TN Governor’s Cup recipient) marching band and several awardwinning concert bands. Mr. Rundell has been part of the teaching staff with the Siegel High School Band, Franklin High School Band, and Oak Ridge High School Band. He is also the wind arranger for SouthCoast Music and Design where he is responsible for writing and designing for several groups throughout Tennessee, Alabama, Illinois, and Georgia.